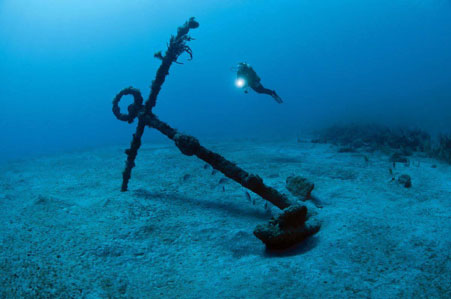 Citizen scientists around the world are being urged to share their anchor ‘finds’ following the relaunch of an online resource that aims to be the world’s biggest public record of these iconic objects.

The Nautical Archaeology Society (NAS) has relaunched the popular Big Anchor Project following a generous public response to a crowdfunding campaign that met its target in just two months. And now it’s appealing to the public—young and old, enthusiasts and professionals—to explore this rapidly growing and free public resource, as well as adding information and photos of their own finds using its easy-to-use interface.

“We are looking forward to seeing new anchor records from every corner of the globe,” says NAS CEO Mark Beattie-Edwards. “We want to showcase the amazing range of anchors out there.”

The relaunch comes a decade after the project first went live, and just a year after malicious hackers sent the original website crashing beyond repair. The more-than-800 original records were not lost, and these are once again accessible on the new website through an interactive map.

“We were thrilled when the target of £2,500 was reached so quickly,” says Beattie-Edwards. “The level of public support to get the project website back online was astonishing. It is testimony to the popularity of the concept and the generosity of individuals and organisations who donated.”

The relaunched Big Anchor Project website was designed by long-time NAS supporter Mike Postons of 3Deep Media Ltd, who has created a bigger, better and more interactive website. “The project was established to make the recording and documentation of anchors easy, accessible and enjoyable,” says Beattie-Edwards. “Mike’s design really meets this objective.”

The NAS hopes to secure more funding in future for further developments, including creation of an app.

The anchor has been an icon of maritime life for over four millennia, and has become a symbol of all things nautical. Today they are found as memorials in seaside towns, as decorative pieces in gardens and museums, and on the sea floor. “You never have to go far to find one,” says Beattie-Edwards, “yet so many are undocumented.”

The project website operates a three-tier recognition system that allows users to record as little or as much about an anchor as they like. User contributions earn ‘Bronze’ status if they include just a photograph of the anchor and its location, ‘Silver’ for identifying its features, and ‘Gold’ if they record its dimensions.

About the Nautical Archaeology Society.

The Nautical Archaeology Society is a membership society that has been engaging the public in the world’s nautical heritage through education, training, research and publication since 1986. It is a UK-based charity with partners around the world.