The DIVER interview: With Michael Menduno – Journalist, Reporter, and Producer 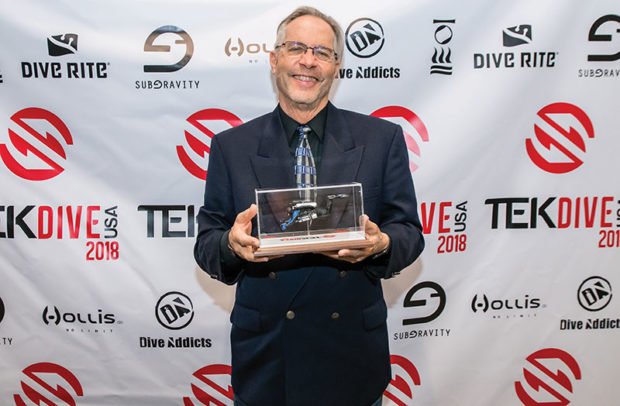 How long have you been diving?

I was first certified in 1976 in Monterey, California.

What made you want to become a diver?

I grew up watching Jacques Cousteau and Lloyd Bridge’s Sea Huntso it was always in the back of my mind. But the moment I took my first breath underwater in the pool in the Bay Area during my open water class, I was hooked. I still remember that moment and the first time I swam at age 7. I’m still an avid swimmer; I swim about seven and a half miles (12km) a week. I love water!

How long have you been a diving writer?

Ha! I started my writing career with diving. I wrote my first piece about a diving citizen-science group I was involved with called the Cordell Expedition in 1988. The group was doing bio-surveys of the deep-sea mounts off the central California coast. We were making relative deep, decompression dives to about 165 ft (50m)—the D-Words!—and I couldn’t find a diving publication who would publish my story. Editors told me you are NOT supposed to do that. Eventually Ken Loyst, publisher of Discover Diving magazine ran the piece. It was 1988.

I was hungry for information about this kind of diving but there was little available so I started aquaCORPS: The Journal for Technical Diving (1990-1996). And then went on to start the original Tek.Conferences and later Rebreather Forum 1 & 2, which helped facilitate the emergence of technical diving. Broke my heart when we went out of business. I have been writing about diving ever since.

Being recognized as the “one of the most influential dive journalists” at TEKDiveUSA this year was a huge honour. OMG!! Even better, it was a community award – tekkies actually voted for me. That really meant a lot. Plus, I had no inkling I was going to get an award. It was a total surprise. Brought tears to
my eyes.

What does diving mean to you?

I ask myself that question sometimes. God knows that there isn’t any money in it (I write about technology and cyber-security stuff to pay the bills!) But diving has so many elements that fascinate me. It encompasses adventure and exploration, science and geeky stuff, cool technology, physical fitness, human spirit, and a big magical dollop of blue zazen. How can you go wrong with that? I’m hooked.

Who is your go-to dive buddy?

Locally my go-to buddy would be my friend Bill Kibbett who’s a GUE Tech 2 diver. Getting closer to the surface, my swim buddy is Wanda Bogin, aka “Fish”.

I am loving my new Shearwater Teric and the ability to go from freediving to open circuit to CCR in one small device. I think they’ve redefined the dive computer! I’m also loving my new Paralenz Dive camera—think GoPro on steroids, made for divers by divers. Oh, and did I mention Yamamoto open cell neoprene? (Michael smiles!)

You coined the term “technical diving”. How did you arrive at this terminology, and did its industry adoption surprise you?

In the first issue of aquaCORPS we featured an article by Dr. Bill Hamilton titled, “Call It High-Tech Diving.” We also referred to it as “advanced” diving” and “professional sports” diving, a moniker invented by marine biologist and early rebreather pioneer Dr. Walter Stark, who invented the Electrolung. At the time, we didn’t really know what to call this new form of sport diving; none of the names seemed to work.

At that time, I had several friends who were rock climbers and involved in “technical climbing,” where individuals used ropes and protection to tackle rock faces that could not otherwise not be climbed. The word “technical” had all of the right connotations. So, I pinched the term for diving. We used it for the first time in aquaCORPS #3 DEEP published in January 1991. In the following issue I changed aquaCORPS’ tagline to “The Journal for Technical Diving.”

Later that year, Drew Richardson, then a vice president at PADI, penned an editorial, “Technical Diving—Does PADI Have Its Head In The Sand?” for PADI’s Undersea Journal. His article helped give our community legitimacy and the name stuck! I was pretty happy about that.

“Freediving is likely the fastest growing area in diving right now. I find that strongly reminiscent of early tech diving. It’s all about exploring one’s limits. It’s edgy, requires ongoing training and practice, there’s currently limited scientific data, and it’s every bit as geeky as tech diving. On a longer timeframe, I think the next technological break thru will be consumer one-atmosphere diving suits, like Phil Nuytten’s Exosuit. The cost needs to come down to make it affordable by sports divers but I am sure it will get there.”

From the beginning our focus at aquaCORPS was improving diving safety, which enabled us to increase our performance. I am reminded of retired U.S Navy Master Diver Sam Huff explanation of the Navy Experimental Diving Unit’s mission: “We make our divers safer so they can go deeper and stay longer.” That is what aquaCORPS and the TEK.Conferences were all about, and I am proud of it. We saved lives.

Beginning with aquaCORPS #5 BENT, we ran an incident report on every tech diving fatality that occurred. I think there was a total of 48 from 1993-1996. I personally did the reporting on all, except cave explorer Sheck Exley’s death, which was reported by Dr. Bill Hamilton, Jim Bowden, and Dr. Ann Kristovich. They were sobering and the ‘most read’ section of the magazine. I was also proud to help bring the sport, commercial, scientific, and military diving communities together for the first time at the TEK.Conference. Heady stuff. I like to think of myself as a community organizer. We are an extraordinary tribe.

What’s next for you?

More swimming and diving of course! I have just gotten into freediving which I absolutely love. I also recently got re-certified as a (open circuit) full cave diver and sometime soon I want to get back on my rebreather.

Now that I am getting long of tooth, I have decided that I want to spend the majority of my time doing water-related activities. I just haven’t figured out how to pay for it yet!