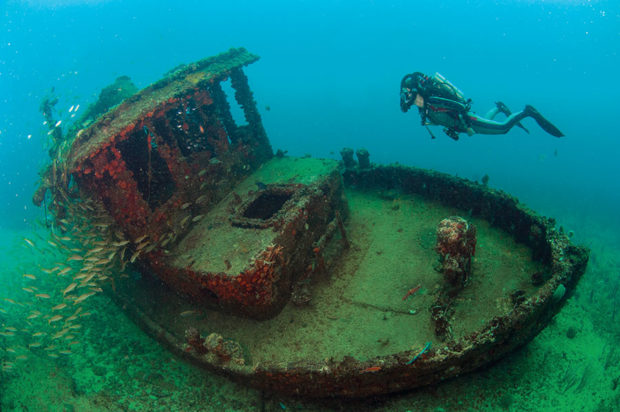 A Waste of Good Air

When we are diving open circuit (normal SCUBA diving) we waste most of the air/gas in our tanks. On the surface, we breathe in air (approximately 21% oxygen (O2), 79% nitrogen (N2)) and breathe out a gas that contains approximately 17% O2, 4% carbon dioxide (CO2), and 79% N2. When we are SCUBA diving, this gas is released into the water and lost. As a result, we are only using 4% of the gas in our tanks and wasting 96% of it.

At a depth of 90 meters (300 feet) we only absorb 0.25 % of the gas and waste 99.75%!!!! Wouldn’t it be nice to only have to carry the very small amount of gas we actually use? That is the basic motivation behind rebreathers. With a perfect rebreather, we would use 100 times less gas at 30 meters and 250 times less gas at 90 meters, compared to open circuit.

So how do you build a rebreather? The concept is quite simple. Instead of breathing out into the water and wasting the gas, you breathe out into a bag and then breathe the same gas back in again. First, however, you have to get rid of the CO2 and replace the O2 that you absorbed on the last breath.

To get rid of the CO2 you pass the gas through a material that absorbs CO2 (calcium hydroxide, sodium hydroxide, lithium hydroxide, etc.). There are several commercially available materials and they can be granules that you have to pack into a container (scrubber) or they can be prepackaged into a cartridge that you simply drop into the scrubber.  The cartridges are becoming more popular because they absorb CO2 in a more consistent and predictable manner. Also, they are easier to use.

The most efficient way to accomplish this task of eliminating CO2, is to create a breathing loop. You put two one-way valves in the mouthpiece, so that when you exhale the gas is forced out one side into the breathing bag (counterlung) and through the scrubber. When you inhale, the gas is pulled in from the other side of the mouthpiece. The counterlungs can be before, after, or on both sides of the scrubber. The most efficient set-up is to have two smaller counterlungs located on the chest and over the shoulders, one before and one after the scrubber located on your back.

The next task is to replace the O2 that was absorbed by our bodies. There are several ways to do this: manually, mechanically, or electronically. But however it is done the rebreather has to accomplish this task.

Things Start to Get Complicated

So let’s go dive our rebreather ….. WAIT! We still have several things to sort out. The O2 we need to add to the breathing loop has to come from somewhere, so let’s add a tank of pure O2. It might be nice to know how much O2 was in the tank, so let’s add a submersible pressure gauge to the tank.

When we ascend we will face the reverse problem. The gas in the loop will expand, forcing gas into our lungs, so we need some way to release this excess gas in the breathing loop into the water. This can be accomplished by breathing out through your nose, or letting some gas escape around your mouthpiece, or putting a pressure relief valve in the loop (similar to your buoyancy compensator device (BCD)).

Although the concept of a rebreather is relatively straight forward, the actual machine is almost always complicated

Speaking of buoyancy, most divers make small adjustments to their buoyancy by breathing in or out. As you are swimming along the bottom you come to a large rock. You breathe in, rise over the rock, breathe out and sink back towards the bottom on the other side. A new rebreather diver swims towards the rock, breathes in, and swims right into the rock!

The volume of gas in your lungs and the breathing loop remains constant as you breathe, so your buoyancy does NOT CHANGE when you breathe in or out. This makes it very easy to maintain a constant depth but much harder to make small buoyancy changes as air/gas has to be added or removed from the breathing loop, BCD, or your drysuit.

When you change depth while diving a rebreather, the additional gas in the breathing loop (not present when diving open circuit) causes the changes in your buoyancy to be more severe than with SCUBA. Learning to control your buoyancy on a rebreather is the hardest new skill to learn. Almost every new rebreather diver will pop to the surface unintentionally at least once while they are training. When you change depth you actually have to start to add or release gas BEFORE you become positively or negatively buoyant.

So let’s go dive our new rebreather. No problem, as long as we stay shallower than 6 meters (20 feet). Oxygen is toxic and 100% oxygen cannot be breathed deeper than 6 meters safely. Oxygen toxicity can present in many ways but the most serious is a grand mal seizure. If this happens underwater, it is usually fatal!

There are several ways to do this and different rebreathers use different approaches. Some just add air or some other gas mixture containing N2 or helium (He) at a constant or variable rate, limiting the amount of O2 in the loop. Calculating the percentage O2 in the breathing loop becomes very challenging using this approach; and beyond the scope of this column. The amount of gas added usually changes with depth (changing gas density) and the amount of O2 the diver uses (takes from the breathing loop) changes with workload.

Conceptually the easiest solution is to measure the partial pressure of O2 (pO2) in the loop and add N2/He or O2 as required to keep the pO2 constant. A constant pO2 makes it very easy to calculate oxygen exposure time and eliminates the maximum safe depth calculation. It also creates the optimal situation for prolonging your no-decompression limits when multilevel diving, and minimizes your decompression obligation. If the pO2 is constant, the PERCENTAGE O2 needs to constantly change, giving you the perfect breathing mixture for every depth. This is how closed circuit rebreathers work.

So now our rebreather has become a bit more complicated. In addition to our tank of O2, we need a tank (and tank pressure gauge) filled with air or some other diluent. Pure inert gas is not used due to the danger of breathing it by mistake, resulting in an instant loss of consciousness.

We also need a minimum of three O2 sensors to maintain redundancy (one may fail and give high or low readings during the dive). Furthermore, we need electronics to determine the most likely pO2 based on the readings of the sensors and to add O2 when required. We could also add a CO2 sensor, alarms, safety checks, etc. for safety back-up.

Although the concept of a rebreather is relatively straight forward, the actual machine is almost always complicated. Learning to dive it safely and effectively can be quite challenging.

Semi-Closed Rebreathers (SCR) add a constant stream of diluent, and hence, can be relatively simple; but determining the pO2 and resulting decompression requirements becomes very complicated for these units. These SCRs are at best only 8-10 times more efficient than open circuit. My personal opinion is that SCRs are not worth the added complexity, expense, and risk compared to open circuit. (I’m willing to debate the concept with proponents of semi-closed circuit rebreather divers, as long as they are willing to buy the beer.)

Fully closed circuit rebreathers (CCR) are relatively complicated but they are extremely efficient, plus the current electronics are cheap and reliable. In addition, CCRs give you the optimal gas mixture at every depth, allowing you to do the most diving with the smallest decompression obligation. They are also quiet. If the diving you want to do requires a rebreather, I would seriously consider diving CCR.

However, there are many ways you can die while diving a rebreather and rebreathers are becoming much more common in diving fatality statistics. In the next column, I will look at how rebreather divers are dying; make some observations on why I think this is happening; and suggestions on how to reduce it.